This topic is going to be sort of continuation of my previous post about – an SQLite Wrapper for Windows 10 UWP applications. I'm writing “sort of” because it’s actually an update to that post. The project part – setting up the solution – hasn’t changed but the code part has. Please understand that the library is being constantly developed and improved, hence I need to explain how things has changed and how one should implement their database logic with latest release of BuildIt SQLite.

For those who are not very familiar with Windows 10 and UWP application development please, before you start going through what’s written in here, refer to my previous post about SQLite Wrapper for Windows 10 UWP applications, where you can find guidelines how to set up your solution / project.

For those who can’t be bothered reading and/or want to figure things out by themselves I recommend looking at the GitHub repository where you can find some short guidance / information about how things work with BuildIt (Sqlite). Also there’s a  CRUD database operations example which could be a good place to start your explorations.

EDIT: Apologies to all that wanted to try out the and some of the links weren’t working, but evolved from its own existence, to become a part of a bigger set of libraries, called BuildIt. Those libraries are a foundation that we rely on, in almost every project that we create @BuiltToRoam, so besides working with SQLite check out others, I can bet you will like it and use it.

Let’s start from the Core project and setting up the DatabaseService.

I think it’s worth noting that one is left with an option to derive directly from BaseDatabaseService and in that case it opens a path where one could provide their own SQLite database connection creation (implement CreateSQLiteConnection method) handling.

Let’s explain a bit about DatabaseService constructor parameters and its purpose.

NOTE: In almost all of my projects I use mvvm cross-platform framework MvvmCross, which I highly recommend, and with it, out of the box, comes Dependency Injection (IoC) mechanisms. Those mechanism under the hood, create and inject automatically singletons for mentioned above interfaces (constructor parameters). You can find out more about it in the N+1 days of MvvmCross blog posts and videos. For those who are familiar with it and to spare you some time looking for how it could be initialized, here’s a sample code from Setup.cs file

Important thing, that has been changed in the latest release, is BaseEntity class. It was redesign to consists the update of representation of the entity logic (update of the database record). For example:

There’re two things to note in the above code. First is to do with self-reference generic class in the class declaration. It was purely designed this way so we could handle the update logic inside of the Entity class, which is called from the BaseRepository every time the Update logic on the entity is executed. UpdateFromEntity method – second thing that one should be aware of – should be a place where entity update is being handled.

Assuming you have an instance of DatabaseService handy (e.g. created with MvvmCross DI mechanisms) and with all this setup / knowledge we can now start working with our database, and it couldn’t be any easier. To create new database record (entity) one could write something as follows:

To retrieve all the table records or just one:

Those are Base CRUD methods, but if you’d like to write more sophisticated queries you should look into BaseRepository and Table property. It will allow you to perform some LINQ queries on it. For example:

NOTE: As it’s not perfectly obvious, but the CreateSQLiteConnection method won’t create a newconnection every time the method has been invokde, instead it will use previously cached one.

NOTE: Another thing is, that not all LINQ queries will be valid in terms of translating them to what database understands, hence sometimes it’s better to grab all table records (entities) and perform some queries on the values stored in memory.

I would highly recommend checking out the GitHub repository and the sample that is in it, as it consists of all of what I’ve just wrote about, and you can easily compile and debug that code. 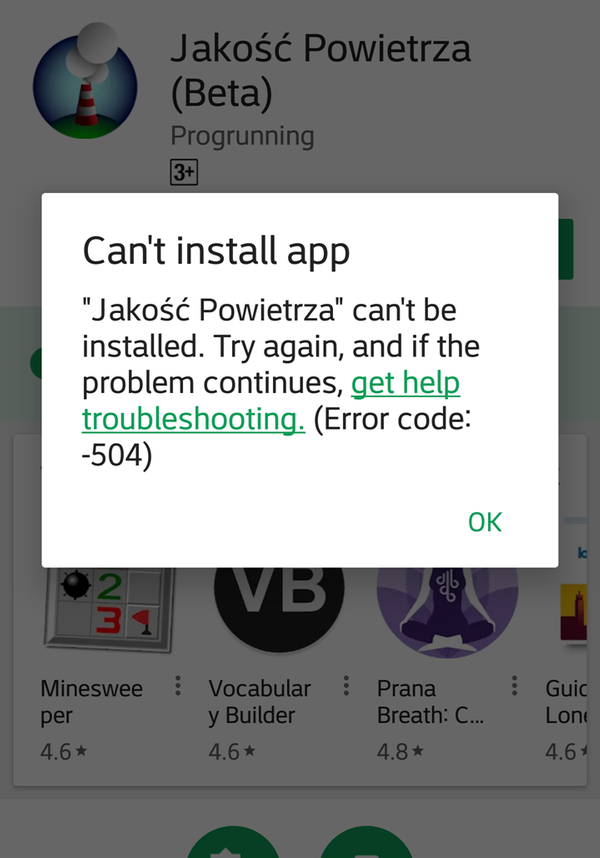 I did a brief search on the Internet what could be causing such behaviour and majority of posts were pointing at some issues with cached data by Google Play Store and/or Google Play Services somehow breaking installation process. They were suggesting cleaning cache of these to solve the problem.

The idea for SQLite Wrapper was purely dictated by the demand. We, at BuiltToRoam – company that I work at – are dealing with all types of universal application projects (Universal Apps for Windows 8.0-8.1 and Windows Phone 8.0-8.1 or UWP for Windows 10) that are required to use database(s)